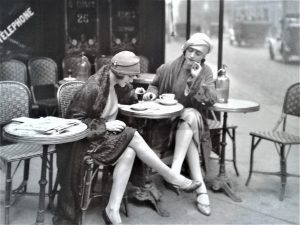 A true “Parisienne”, even the slimmest one, always wants to slim, just a bit… But Parisiennes very seldom have any overweight issues. Generally they are very slender. How they do???

Let’s start with their eating-at-home habit
As for dinner or supper, normally French people have it at home. A Parisienne can have everything she wants for dinner, with a clear conscience, taking into account that after a light lunch at 12.00 she NEVER eats anything till 8 p.m.!

Secret number 1: bio and organic trend and supporting local farmers
There is a very popular recent French trend – supporting local farmers. Small farmers associations offer a sort of yearly subscription: a customer signs a contract and is provided with a basket of fresh season fruits and vegetables once a week. That’s a costly affair, the average price of this basket in the Paris region is about 30 euros. But in this amount is included not only the price of fruits and vegetables, but also a share of costs for maintaining the farm and soil of your vegetable producer. So subscribers, at the same time, eat fresh seasonal vegetables and help agriculture. It has become a very fashionable concept among wealthy French households.

Secret number 2: NEVER having a snack
Let’s go back to french supper at home. It consists of an appetizer, a main course with a side dish and – quite often – a dessert. WHY ARE THEY SO SLENDER, eating all these “pains au chocolat” in the morning and all those “mousses à chocolat” in the evening? The secret is the very healthy french eating habits. As I said before, after a light lunch at 12.00 french generally NEVER eat anything at all till 8 p.m.! Never having a snack – that’s one of their secrets.

Secret number 4: they slow down while eating
Typical French meals last several hours and is rich with conversation and debate (often about politics), and normally TV during the familly meal is off. Just taking pleasure with every single spoon!

In my next post I’ll tell you about Parisiennes favorite kinds of sports (yes, they still go in for sport, on the contrary of what you may have thought after reading this blog:).