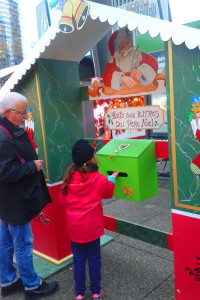 I’ll tell you where it’s worth going if you come to Paris with children during the Christmas period.

Which are the best skating-rinks in Paris? There are three of them. The first, it’s just a must see, is set up directly… on the Eiffel Tower! Yes, at a height of 57 meters. So we can skate and enjoy the view of Christmas Paris at the same time. You’ll find one more skating rink in the Grand Palais — this is France’s biggest one, 2700 square meters in area. And finally, there is a free skating rink in front of the City Hall. Here you can skate, ride on the free merry-go-round and also have a look at the Christmas decorations in the BHV (Bazar de l’Hôtel de Ville) — the most stylish Paris store, where all the Parisians shop for clothes (and not at Lafayette or Printemps!)

And where is the main Paris Christmas Tree? The most famous and symbolic Christmas tree in the city is traditionally erected at the square in front of Notre-Dame Cathedral, yes, that is where where Quasimodo suffered for his Esmeralda… By the way, this year the 25 meter high Main Paris New Year Tree was given to Paris by Russia. According to Russia’s ambassador in France, Alexandre Orlov, who personally took part in the inauguration, this gesture shows that the friendship between Russia and France is so deep that no political games or sanctions will be able to destroy it.

For children it’s also really worth going to Paris Disneyland during the Christmas holidays. Every year Santa yokes his reindeer for a long trip to Paris Disneyland. Here he converses, personally, to all the children, accepts letters and orders, takes photos with everybody and gives presents… During the Christmas period in Disneyland a special Christmas parade takes place several time a day: Santa sleighs over Disneyland, together with Micky and all the family, gives out presents, everybody sings and dances … In 2014 the Parade was completed with a new float: with sweets and candies! So, mums and dads, you’ve got it: you have no right to miss this event!
In my next posts — follow me — I’ll tell you all you have to know when you come to Paris as a tourist.